The Benefits of Camel Milk

We, as human beings, are habituated to consuming milk and milk-based products, which originate from bovine animals, namely cows, buffalos, sheep, and goats. However, these dairy products are not the only option available in the market. There are various non-cow milk products that can be tried for their unique taste, health benefits, and nutritious elements. One of the most beneficial and nutritious non-cow dairy products that are still consumed in the desert regions and is gaining popularity in the cities is camel milk. It has been seen through the ages that camel milk has provided support to the nomadic and pastoral cultures of the desert region.

Although camel milk is not as prominent as cow milk, it is still gaining popularity, as it has various advantages that include better nutritional properties, chemical compounds, and it is more environment friendly, as camels do not require a large grazing area as cows or goats require. It has higher amounts of iron, Vitamin C, proteins, lower amounts of fats, zinc, potassium, etc. which have been known to keep the human body healthy and fit. Apart from its richness in various nutrients, it is also helpful in preventing diabetes, because it has insulin-like properties that are helpful for treating type 1 and type 2 diabetes.

Ayurveda has referred to the medicinal properties of camel milk and has classified it under “Dugdha Varga.” Camel milk is known as a valuable source of food and nutrition with a long history of its use for a thousand years in different cultures. Camel milk may not be everyone’s cup of tea; however, switching to camel milk based on the current research can be said to be one of the major reasons for alleviating lifestyle diseases. Considered as a healthy drink due to its low fat and cholesterol content, when compared to cow or goat milk, camel milk is one of the best forms of milk available today. 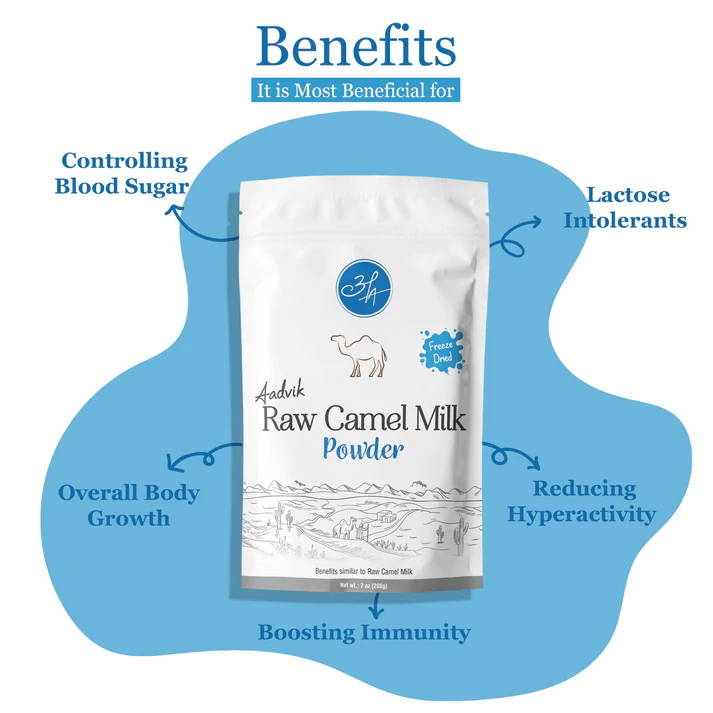 When an individual consumes a one-half cup of camel milk, that is, 120 ml, the following nutrients are being consumed:

When it comes to the nutritive value of camel milk, it is known that it plays a significant role in maintaining the overall health of an individual. It is rich in calorie, protein, and carbohydrate content that allows camel milk to be compared to cow’s milk. Being lower in saturated fats and rich in Vitamin C, B, calcium, iron, and potassium makes it healthier than cow’s milk. In terms of iron, camel milk has 10 times more iron than cow’s milk.

When camel milk is compared to milk produced by other bovine mammals, it has a greater value in terms of its digestibility in the human gastrointestinal system, as it has smaller milk fat-globules and has hypoallergenic properties. It does not contain lactoglobulins, which shows that it is good for people with dairy allergies. Milk has been known to be a major source of saturated fatty acids (SFA), and unsaturated fatty acids (USFA). The SFA content in camel milk is lower as compared to cow milk. It has 55% more zinc than goat or cow milk that is considered a major element for limiting the dietary growth of nutrients in individuals suffering from deficiencies in micronutrients. Camel milk contains long-chain fatty acids, linoleic acids which have known properties in keeping the brain and heart-healthy. 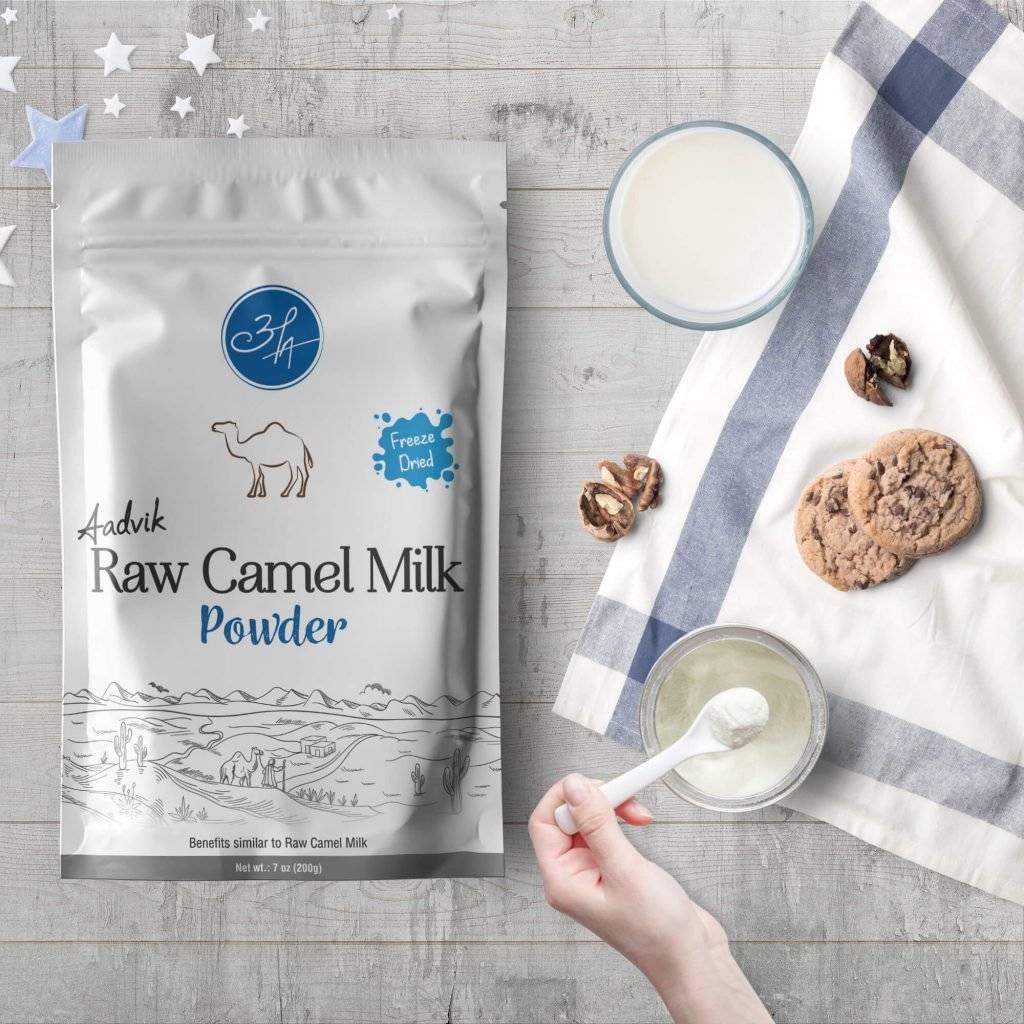 Camel milk is known for its low amounts of fat and cholesterol levels, and modern medicinal studies have proved its effectiveness in treating various lifestyle disorders. Camel milk has the ability to allow an individual to go through the day with all his/her activities without consuming any other form of food. This is possible due to the presence of enough nutrients in the milk. Camel milk is opaque white in color, with a normal smell that is sweet and has a sharp taste. It is, at times, salty, due to physiological factors.

The water content in camel milk is the highest as compared to other forms of milk, that is, 86-87%. Therefore, it can be said that camel milk has the ability to determine health benefits for an individual. In addition to its moisture levels, it is also a rich source of minerals, vitamins, fatty acids, enzymes, etc. It is also a good source of calcium, potassium, magnesium, zinc, etc., and is rich in Vitamin A, E, C, and B1. It has been seen that the concentration of Vitamin C is 2-3 times higher than that of cow milk and has a lower pH level that stabilizes the milk. This allows the milk to be stored for a longer period of time without the formation of a cream layer.

It has different fatty acids such as butyric, caproic, caprylic, capric, lauric, myristic, myristoleic, oleic, linoleic, arachidic acids, etc. which help prevent the growth of antigens and boosts the effectiveness of the immunity system. It also contains enzymes such as aspartate aminotransferase (AST), alanine aminotransferase (ALT), gamma-glutamyl transferase (y-GT), acid phosphate (ACP), etc. that play a significant role in maintaining the quality of the milk. Camel milk also contains a number of protective proteins, such as lysozyme, lactoferrin, lactoperoxidase, peptidoglycan recognition protein (PGRP) that have antimicrobial properties, which help in enhancing the shelf life of camel milk.

The benefits of camel milk are endless. Camel milk naturally acts as a probiotic that helps in healthy bacteria growth in the gut that makes it easier to digest and may also help in improving gastrointestinal health and boost immunity. The benefits of camel milk are known to provide the foundation for its positive effect on health. Various researches have been done and are ongoing that show promising results on camel milk. A major finding is that it has lactoferrin that acts as an antioxidant, in turn, protecting the body from harmful viruses and bacterial infections. Acting as a good source of protein, it helps in maintaining stronger muscles. Camel milk has 50% less fat and 50% less saturated fat when compared to other forms of milk, which reduces the chances of heart diseases. The blood pressure of the body is maintained as camel milk has potassium and phosphorus. When camel milk is consumed with a low-sodium diet, it reduces the chances of a stroke. Drinking camel milk may benefit the body in many ways, but most importantly, it is delicious!

Camel milk has been known to provide help to individuals with autism. It has a smaller size of immunoglobulins that are effective in improving the immune system of the individual or child with autism. In different studies, it has been mentioned that camel milk reduces oxidative stress, and calms the mind of the autistic individual, along with increasing the antioxidant enzymes.

As autism is associated with gastrointestinal diseases, as well as mental retardation, consuming camel milk can help them in improving their health. Camel milk is known to develop motor behavior, improves the behavioral and cognitive abilities, increases antioxidant activity and reduces oxidative stress among autistic individuals. It also boosts their social behavior, communicating abilities, along with an improvement in their speech and language.

Camel milk can be said to be a boon for autistic people.

Diabetes is one of the most common diseases, which is associated with various complications such as heart diseases, kidney failure, blindness and amputation of the lower extremities. Camel milk has shown results in lowering the blood sugar levels and improving the insulin sensitivity in individuals suffering from type 1 and type 2 diabetes.

Thus, it can be said that camel milk acts as a great supplement for individuals suffering from diabetes.

Ayurveda has always emphasized on essential foods like milk, etc. Ayurvedic studies have always suggested that Camel Milk is one of the most potent elements for increasing height, and it is known to be the most intrinsic property of Camel Milk.

Camel Milk is rich in calcium, vitamins and minerals that are required for the overall growth of the body, which includes height increase too! To enhance the height-increasing element of camel milk, it should be consumed with shatavari, ashwagandha and turmeric. Adding all these ingredients in Camel Milk have shown positive results in increasing height.

Lactose is a sugar that is found in milk and other dairy products. A human body generates an enzyme called Lactase, which makes the sugar to be digested by the body. Some individuals lack this enzyme, which leads to inefficiency in breaking down the sugar. These individuals are intolerant towards lactose.

The milk protein, namely, beta-lactoglobulin present in cow’s milk is the major reason for allergies in humans. However, Camel Milk is known to be exempted from this protein, which makes it safe for people with allergies. Camel milk has a very low amount of lactose in it, thus making it easily digestible for those with lactose intolerance.

Camel milk also lacks A1-casein that cannot be digested by those with dairy allergies. It has A2 beta-casein proteins and various other proteins that contain immunoglobulins that may be helpful in boosting the immunity of an individual.

It’s not just this, Camel Milk also contains Lactoferrin and Lysozyme that can help in reducing the growth of infectious microbes and keep the immune system healthy!

Beauty practices have had an endlessly fascinating history for the past civilizations. Among them, Camel Milk has outweighed most of the exfoliators, hydrating masks, vitamin c serums, etc.

Camel Milk is known to have a higher concentration of alpha hydroxyl acids (AHAs) that help in exfoliating dead skin cells that allow for new cell generation and its renewal. The presence of copper, iron, zinc and Vitamin C makes Camel Milk an anti-ageing powerhouse.

Vitamin C is a required element for generating collagen that protects the skin from the environmental pollution that causes wrinkles, fine lines, sagging skin and age spots. It is also helpful in brightening the skin, reducing discoloration and evening out acne marks.

How to use Camel Milk:

Camel Milk, aside from keeping the body healthy and strong, also has various uses. Drinking Camel Milk is one of the greatest ways for both children and adults to give their body the required amount of calcium and proteins. Camel milk, as its own beverage, can be consumed as there is no requirement to add anything to offset the taste.

It can be easily mixed with coffee, which can act as a great way to start your day. Camel milk can also be used to cook. Instead of using cow’s milk, camel milk can be replaced to get the healthy and tasty dishes that you want to have.

Whether it is a smoothie, or an energy drink, camel milk can be used for both. Camel milk can also be consumed in breakfast, with cereals, muesli, etc. Enjoy baking pudding, pancakes, cakes etc. with camel milk.

However, if this idea seems too extreme, you can start with making ice cream. Mix camel milk with dates, and a healthy drink will be ready! If you don’t like to drink plain milk, then add a little flavor to it with a bit of maple syrup, strawberries, banana, or turmeric. These give a special taste to camel milk and keep you healthy and safe from diseases.

Where to Buy Camel Milk?

Thus, it can be said that Camel Milk is a boost to human health that has recently gained attention as a healthy food in the developed countries. Research has shown that it is good for people with lactose intolerance and allergies to cow milk. It also helps in lowering the blood sugar, boosting immunity, and overcoming various behavioral and neurodevelopmental diseases like autism.

There is a huge scope for the preparation of functional fermented food products with Camel Milk. It would be a boon for the Camel Milk industry if it is able to get the premium price for its products.